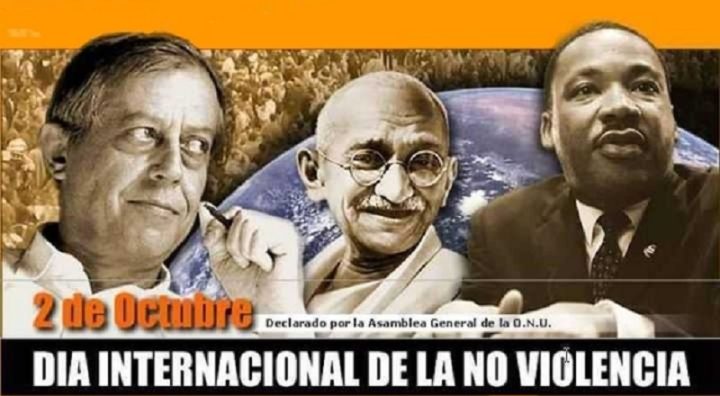 “No Human Being is born violent, violence is not a destiny, it is an intention. The opposite intention is possible.

The Methodology of Non-violence is the only valid way to banish violence in the World.”

In 2007 the General Assembly of The United Nations (UN) established 2 October, day of Mahatma Gandhi´s birth, as the “International Day of Non-Violence”. So, this year we are celebrating its eleventh anniversary.

Violence in every conceivable form is spreading across the planet. Conventional wars, occupied territories, nuclear that could lead to a future nuclear catastrophe, famine, mass migrations, economic exploitation, crisis of millions of refugees, terrorist attacks, violence in schools, cities, homes, and violence also within people that is expressed as internal suffering and generates despair.

Violence, in all its forms, is a fundamental part of an individualistic and dehumanizing system whose methodology of action always generates more violence.

However, by observing the events of recent years, it is possible to see a way to solve the problem: the “Methodology of Active Non-Violence”

Non-Violence is a new sensitivity that beginning to be expressed in the growing opposition to different forms of violence on different continents and in large and small groups of people and even in individual actions.

Non-Violence is a methodology of action that promotes a profound individual and social transformation, placing the Human Being as a Central Value.

Non-Violence is a force capable of changing the violent and inhumane direction of current events.

Non-violence promotes a new internal and external attitude towards life, having as main tools:

The Methodology of Non-Violence has been expressed in history with clear actions and developments in its attempt to transforms the world. Contributions such as those made by Leon Tolstoy, Mahatma Gandhi, Martin Luther King, Nelson Mandela, and more recently by the Guide of Non-Violence and founder of the current of thought known as New Humanism, Silo.

The Methodology of Non-Violence is also expressed in the thousands and thousands of common actions that millions of people around the world promote every day. Organizations, groups of volunteers and isolated people who, with a spirit of solidarity, try to transform the situations of violence that exist around them.

Are signs of Non-Violence, sings of a new spirituality and a new solidarity.

Signs of a new personal and social horizon that we need to build. They are signs of a Non-Violent evolution of which everyone can be part.

It is the right time to express the calm and powerful message of Non-Violence. A time of great need that we must express our best qualities to build a Non-Violence future.

Next October 2nd let us radiate with strength to the world the message that says:

“The Methodology of Non-Violence is the only way out”